Posted by Marianne Hoesen on Friday, April 20, 2012 Under: festivals and fairs 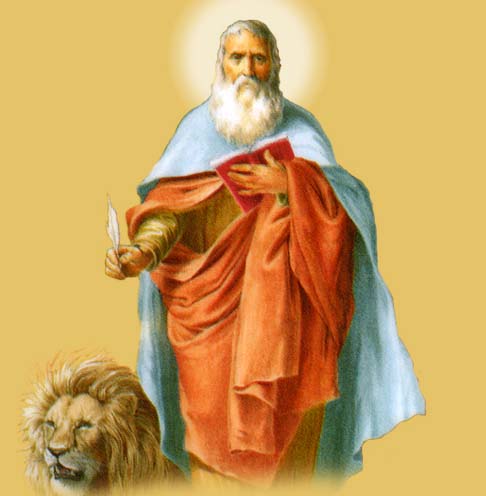 Saint Mark, also known as John Mark, is not only the patron Saint of São Marcos da Serra, but also of the town of Venice in Italy. Also he is the patron of notaries, writers, secretaries and glaziers. Christians call upon him for good weather and a good harvest. Also he helps against lightning and hail and with sudden death.

He was one of the 4 evangelists and wrote the oldest gospel of the bible. He was one of the 70 disciples and later founded the church in Alexandria, which today is claimed by the Coptic Orthodox Church. Also he is honored as founder of Christianity in Africa. He died in the year 68 in Alexandria. His body was later taken to Venice by Venetian merchants.

Saint Mark is often represented with a lion lying at his feet, because the lion, one of the 4 symbolical animals, makes the desert re-echo with its roaring. Also the lion is in the weapon of arms of Venice.

On the 25th of April the parish of São Marcos has its yearly festivities to honor the patron saint of the village. The whole population is invited to participate. Location: the church square.

At 9.00 h the day starts with a walk
10.30 h there is a mountainbike race organised by the Serrano Futebol Clube
15.30 h mass and subsequent procession through the streets of the village
17.00 h various games and entertainment for the children
18.00 h lunch gathering at the church square
19.00 h music and dance with accordionist Nuno Duarte


In : festivals and fairs