Posted by Marianne on Saturday, May 7, 2011 Under: history 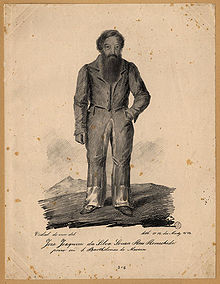 Remexido or Remechido, the nickname of José Joaquim de Sousa Reis (Lagoa, Estômbar, 19 October 1796 – Faro, 2 August 1838), was a notorious bandit of the Algarve in Portugal.
He was the son of Joaquim José dos Reis and wife Clara Maria do Carmo da Rocha, both born in Estômbar, in the municipality of Lagoa, and died before a firing squad at the Campo da Trinidade (site of the present school hall of the Tomás Cabreira Secondary School) in Faro on 2 August 1838.
He served as a supporter of Miguel of Portugal under General Tomás Cabreira at the Battle of Sant’Ana, during the Liberal Wars. After the defeat of Miguel in 1834, Remechido found himself savagely persecuted, and took refuge in the mountains of the Algarve where, supported by the mountain people and resorting to guerrilla tactics, he systematically thrashed the government forces.
In order to discover his whereabouts, the government forces publicly interrogated his wife, and when she would not betray him, killed his 14-year old son, two injustices which made him resolve never to surrender and to punish those who had wronged him. He was, however, captured and brought for judgement before the Council of War. Even in his last days he was the victim of injustice: although Queen Maria II of Portugal granted him a pardon, for political and personal reasons the Council of War nevertheless sent him to his death before a firing squad.