Posted by Marianne Hoesen on Friday, January 25, 2013 Under: way of life
um meia de leite
The Portuguese are proud of their coffee. And not without reason! Some of the richest coffee growing countries in the world are ex-colonies of Portugal. Although the sound of the coffee grinder and the espresso machine can be annoying at times, it also promises a great quality coffee is nearby. The Portuguese generally do not drink their coffee at home, but rather have one in the local café or pasteleria. Here they can order their beloved coffee, just the way they like it.
If you want to have a coffee in São Marcos da Serra, here is a list to help you pick the one you like best:

uma bica or um café: A dark, rich espresso. A single measure of strong black coffee served in a small cup. A bica usually half fills the cup and has a creamy golden brown head called a crema. The origin of the word bica is not really known. One of the stories says it stands for bebe isto com açucar (drink this with sugar), like most Portuguese do....
uma bica cheia (um café cheio): the same as a standard bica but the small cup is topped up with hot water
uma bica dupla (um café duplo): a double espresso served in a standard sized cup.
uma bica curto or um café Italiano: a very strong bica with half the usual water.
uma carioca: an espresso made with half the amount of coffee.
um bica com cheirinho: a bica with a dash of medronho or aguardente. This gets the fire started on a cold winter morning!
um abatanado

um abatanado: a long weak coffee in a medium cup.
uma bica pingada (um café pingado): a bica topped up with a little milk, served in an espresso cup.
um meia de leite or um café com Leite: coffee mixed with hot milk, usually a bica but sometimes a weaker coffee brew, served in a larger cup. If you like it a bit stronger, ask for a meia de leite escuro. 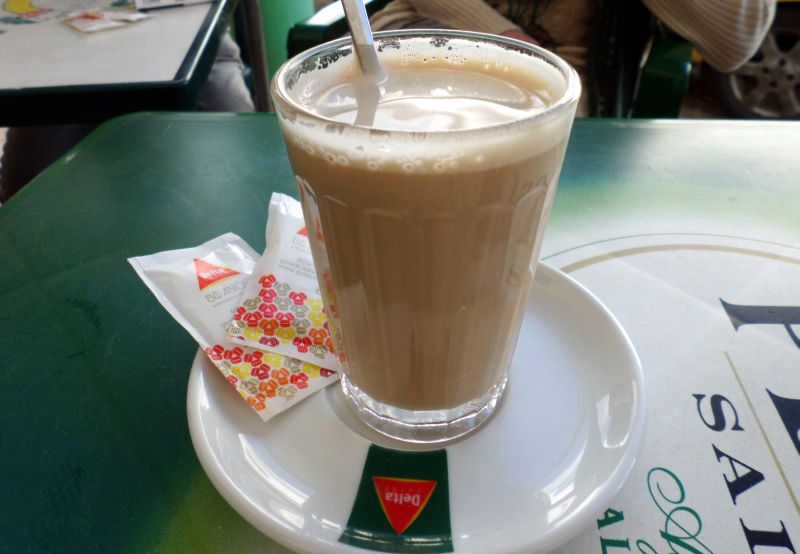 um galão: an espresso mixed with hot milk served in a tall glass. Depending where you go, this may be very milky. If you prefer it a bit stronger, ask for a galão escuro.
um garoto: um garoto is a little boy in Portuguese. This means a little coffee, usually made from the second run, filled up with milk, served in an espresso cup. It is a miniature version of a weak galao and is usually ordered for children.
um café descafeinado: decaffeinated coffee, usually granular dissolved in water and not from the espresso machine.
So, the choice is entirely up to you! My favourite cup is a meia de leite escuro, whereas my husband prefers the galão with a Constantino (type of brandy) stirred in. Ans what is your favourite???