Posted by Marianne on Thursday, June 16, 2011 Under: sport and entertainment 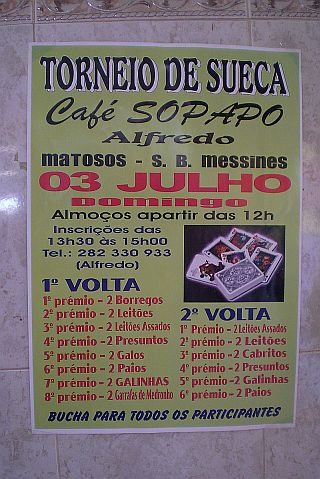 In many places you can see posters advertising a Sueca tournament, where prices may be a lamb, suckling pig, a rooster or a bifana,  Sueca (also Portuguese for a Swedish woman) is a point-trick game with trumps and is probably the most widely played card game: it is played in most parks and coffee places where there are at least four people.
If you want to know how the game is played and maybe enter a tournament yourself, here are the rules:                   Sueca is a game for four players playing in teams, two against two, with partners sitting opposite. It is played with 40 cards (remove the 8s, 9s and 10s from a standard 52 card deck). The rank of the cards in each suit, from high to low, is:
ace, 7, king, jack, queen, 6, 5, 4, 3, 2 .
The seven, which is the second highest card of each suit, is known as the manilha . As well as the high position of the seven, notice that the jack beats the queen! Probably this arose because in old Portuguese decks the picture cards in each suit were the king, horseman and maid, the female picture card being the lowest of the three.
In Sueca, the aim is to win tricks containing valuable cards. The card values are:
ace 11 points
seven 10 points
king 4 points
jack 3 points
queen 2 points
6, 5, 4, 3, 2 -  0 points
There are 120 points in the deck altogether.
The Deal
In most places, the game is played counter-clockwise (though in Brazil it is played clockwise - see below ). The first dealer is chosen at random and the turn to deal passes to the right after each hand. The player to dealer's right shuffles the cards and the player to dealer's left cuts. The dealer then gives 10 cards to each player, in a single batch, beginning with the player to dealer's left, going around clockwise and ending with the dealer. The bottom card of the deck, which belongs to the dealer, is turned face up, and its suit becomes trumps.
Alternatively, the dealer can choose to deal the first ten cards to himself, the next ten to the player to his right, and so on counter-clockwise. In this case the dealer's first card (the top card of the deck after the cut) is turned up and determines the trump suit.
The Play
The player to the right of the dealer leads to the first trick. Players must follow suit if they can. A player who has no card of the suit led may play any card. If any cards of the trump suit are played to a trick, the highest trump wins. Otherwise, the trick is won by the highest card of the suit led. The winner of each trick leads to the next.
No signals between partners are permitted.
Scoring
The object of the play is to win tricks containing more than half the card points. The team which takes more than 60 card points scores one game. The first team to score four games win the rubber.
If a team takes 91 or more card points in tricks on one deal, they score two games instead of one.
If they take all the tricks they score four games and thus win the rubber immediately. This is known as "dar uma bandeira" (which literally means to give a flag). Taking 120 points but losing a trick (with no counting cards in it) is not sufficient to dar un bandiera . In this case the winning team would just score 2 games for having more than 90.
If there is a tie, both teams taking exactly 60 card points in tricks, no one scores, but the next hand is worth an extra game - ie the winners will score two games if they take 61 - 90 card points; three games if they take 91 or more. If the next game is another tie, the following hand would be worth two extra games - ie at least three games to the winners.
The score in games is often kept by marking dots at the ends of the arms of a cross, like this:

Software
You can download a freeware Sueca program here

In : sport and entertainment