Footballization of a Society - The Importance of a Game

Posted by Marianne Hoesen on Friday, October 14, 2011 Under: sport and entertainment 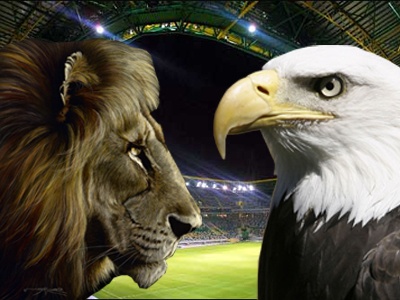 Football is omnipresent in Portugal, you might even speak of "footballization" of the Portuguese society. This also goes for São Marcos da Serra. Here the football-a-holics are divided between the clubs of Benfica and Sporting (or should I say Sporting and Benfica?). Anyway, the third important national club, Porto, is out of the picture here.

A little bit of history
Football was brought to Portugal in the late 19th century by Portuguese students who returned from England. The first match on the mainland was in 1889 on the spot where now the Campo Pequeno is situated. Portugal won by 2-1 from England then.
Later the game spread through colleges and lead to the foundation of clubs all over the country. "Clube Internacional de Futebol" (1902) was the first Portuguese team to play abroad, defeating Madrid Fútbol Clube in 1907 in Madrid. The main domestic football competition is the Primeira Liga. Besides Porto, there are two other important clubs in Portugal:  Sporting Clube de Portugal was founded in 1906 and Sport Lisboa e Benfica was born in 1904.

Football in everyday life
People in this country are so fond of this game that there are 3 different daily newspapers on the subject. In every café you will find a copy of "O Record" next to the daily newspaper. It is the national sport of Portugal and most people take it very seriously. On TV you can hear and see the latest news on football right after the most important national news and the topic takes up a lot of time (but only if Portugal won). Only after the subject of football is finished, the rest of the world news is being discussed briefly.
.
The most important celebreties of Portugal are football players or trainers, such as Ronaldo and Mourinho. One man of the village even states: if you don´t like Ronaldo, you don´t like Portugal. Another guy is so in love with his club Benfica that he has a tatoo on his arm of the logo and he colours his hair red when Benfica wins an important game.

Every day football is being discussed at home, at work, in the café and on the street. The village is roughly divided into 2 parts. Half of the people are fan of Benfica and the other half loves Sporting and the only thing that matters is that "the right" club wins. Most of the time the games are shown on television and are watched at home or in the café. Hardly anybody goes to see a match life in the stadium, mostly due to the high prices of tickets, the long distance and the late games on working days.

Lost local Loyalties
For me, as a foreigner, it is sometimes hard to understand the passionate loyalties to clubs so far from home. It would all be a lot easier to go to a stadium closer to home. There seems to be a loss of local loyalties and that is a shame.
So I hereby call upon you men, women and children of São Marcos da Serra to go and support your very own football club: SFC - Serrano Futebol Clube.    Força!
Be a true supporter and "like" them on Facebook:  https://www.facebook.com/profile.php?id=100002173580600

In : sport and entertainment